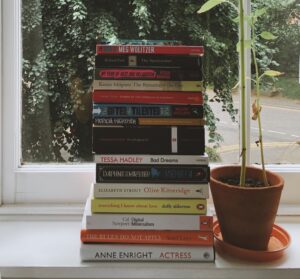 From bottom to top.

Actress is the first Anne Enright novel I’ve read and I’ve got no idea why I haven’t read any others. She is such a skilful writer. The narrator, Norah, slowly unpicks her mother’s famous and turbulent life as an actress, lover and mother. I love this passage where Norah invents a scenario about her father going over the cliff at Big Sur. ‘On the day he died the ocean was very blue and the car roof down as they wound about the hairpin bends. Sometimes, when I thought about it, there was a woman in the front seat beside him. This woman was there to startle at the sight of an oncoming truck and fend it away with her lifted hands, before we saw, from a great distance, the car jolting down the rocky slope, her chiffon scarf drifting high. I played the scene over in my mind many times. His death was a chance to cut away from difficulty into silence. It was so tiny, like a bullet hole in the sky.’

The Rules do Not Apply by Ariel Levy is a memoir published in 2017. Ariel Levy is a journalist and staff writer for The New Yorker. I really enjoy her writing style. It’s simple, yet devastating. The main theme of the memoir is that we can’t have it all. Levy thought she could, that the rules didn’t apply to her. A devastating loss and a failed relationship, leave her questioning all she has learned about love and life. Levy is openly bisexual. Her observations cut straight to the bone. There are many quotable line in this heart-breaking memoir.

I am a big Cal Newport fan, especially his book Deep Work. Digital Minimalism is an expansion of his views on social media, email and the internet and their role in productivity (they decrease it!). I would recommend Digital Minimalism for anyone who wants to spend more time offline and find meaning away from a screen.

Everything I Know About Love is journalist Dolly Alderton’s much talked about memoir of her twenties. It won autobiography of the year at the 2018 book awards. Is it worth the hype? Definitely! I wondered if I would find the book irritating so didn’t get around to reading it for a long time. I was completely wrong. It manages to be heart-warming, uplifting, so, so funny and sad all at the same time. You don’t need to be in your twenties or to just have left your twenties to enjoy it. Read it, whatever age you are.

I have read most of Elizabeth Stout but had somehow never gotten around to reading the Olive Kitteridge books. I think it is possibly her finest, but everything Elizabeth Strout writes is pure genius. I think this is my favourite book the year so far. I have just borrowed Olive Again from my mum.

I read Daphne Du Maurier’s Rebecca for a book club. I was so glad when it was picked as I had never read it and really felt I should have. I’d always heard it described as a gothic thriller which for some reason appeal too much to me. Well, I loved it! I now want to read more Du Maurier as soon as I can. I couldn’t stop turning the page. Rebecca gone straight to the top of my list of books about obsession. I recently watched an old (1970s possibly?) documentary about Daphne Du Murrier and found her really fascinating. Perhaps I’ll get around to reading her biography before too long.

I loved this collection of short stories by Tessa Hadley. She writes so beautifully about middle-class life. Even if you don’t like or read short story collections much I would recommend Bad Dreams.

So I decided to get into Dickens during lockdown having, embarrassingly, not read any Dickens. It’s always interesting to read novels you’ve seen many adaptations of but never read. I actually read, during lockdown, Oliver Twist, Great Expectations and David Copperfield. I think David Copperfield is a masterpiece but I do have a great affection for Oliver Twist despite some of the coincidences that appear to be there to suit the plot. Dickens is also such a funny writer. It’s easy to see why he was so popular.

I’d been meaning to read Patricia Highsmith’s Writing and Plotting Suspense Fiction for ages. It’s short and sweet and not a ‘how to’ book, more Highsmith’s thoughts on her own writing process. It’s worth a read if you’re a writer and in particular if you’d like to have a go at writing a suspense novel or adding more suspense to your fiction.

The Gifted, The Talented and Me is a YA novel by William Sutcliffe, recommended to me by my friend and ex Write Mentor mentee, Louise. I thought I hadn’t read any William Sutcliffe before but then realised I read Are You Experienced about nine years ago before I went to Goa (the book is a funny satire on the India back-pack trail). I really enjoyed The Gifted, The Talented and Me. When Sam’s dad sells his business and becomes rich he moves the family from Stevenage to Hampstead where ordinary Sam is enrolled in a creative school for the gifted and talented. Then book is very funny and a real celebration of embracing the ordinary, trying new ventures and first crushes. Sam’s family life is hilarious. It’s a great teen novel and I would highly recommend it for ages 13+.

I do love an Anne Tyler novel and can’t wait to read the latest, Redhead by the Side of the Road, recently nominated for the 2020 Booker Prize. I’d had Dinner at the Homesick Restaurant on my bookshelves for a while but hadn’t got around to reading it. I’m glad I finally did. The relationship between the two brothers, Ezra and Cody, is so well drawn. Anne Tyler is just brilliant on family dynamics. I love everything she writes.

The Remains of the Day by Kazuo Ishiguro was a re-read. One of my book clients mentioned that it had inspired her novel, and then I just had to read it again, and now I want to read it again! Those end scenes! It’s absolutely heartbreaking; a novel about regret and lost opportunities – like Colm Tobin’s Brooklyn or Ian McEwan’s On Chisel Beach, but probably the best of the three and a very deserved 1989 Booker Prize winner. It you haven’t read it you must do so immediately. And of course as soon as I finished the book I watched the film adaptation with Anthony Hopkins and Emma Thompson, two of my favourite actors. Coincidently, when I worked for Waterstones in Hampstead I saw both Kazuo Ishiguro and Emma Thompson shopping in the store (but not at the same time, and not together). I didn’t recognise Emma Thompson at first and, rather embarrassingly, tried to sell her a copy of my own book.

My Year of Rest and Relaxation by Ottessa Moshfegh is darkly funny. A twenty-something New Yorker confines herself (mostly) to her apartment to sleep through as much of the year as she can, with the help of sleeping tablets. I love Moshfegh’s writing. She doesn’t hold back and her characters are raw and honest. They don’t have to be likeable. The ending of this book blew me away.

There’s something about 20th century suburban American fiction that causes me to feel a familiar comfortable kind of edginess (yes, this is a possible emotion). Richard Ford’s The Sports Writer was no exception. Perhaps it’s the maleness of the books. I don’t know. All I know is that I keep going back for more. The novel is narrated by divorced father Frank Bascombe. It is, in fact, it’s the first of the four Frank Bascombe novels. Frank has given up writing fiction and become a sports writer. The book deals with themes of disappointment, grief and alienation. I hope to read more Richard Ford when the mood takes me. It’s also always interesting to read book published the year you were born.

This was one of the instances where I’d seen the film adaptation before I read the book. It didn’t spoil my enjoyment of this short novel at all. The Wife is absolutely brilliant – a must read if you’re a female writer, if you’re married… actually if you’re anybody! It’s brilliant. I also really enjoyed Meg Wolitzer’s The Interestings, a much longer novel that followed the lives of a group of creative friends over several decades. If you haven’t read any Meg Wolitzer before, The Wife, would be a great place to begin. Then watch the film!