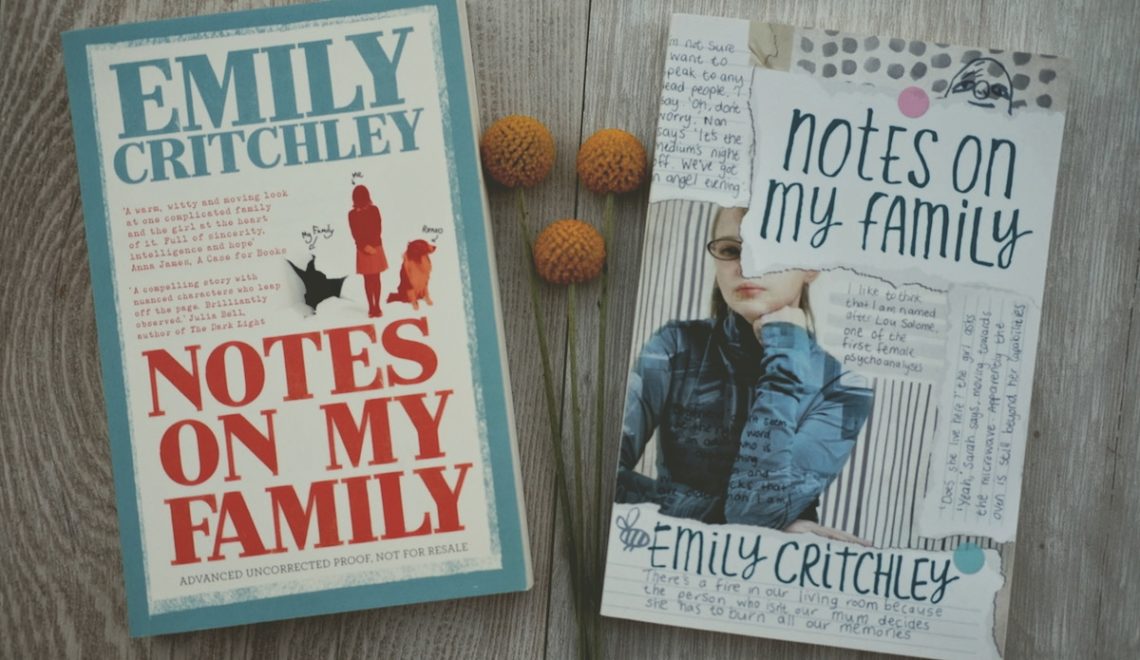 When I began writing Notes on My Family I wasn’t thinking about whether I was writing a book for adults, or YA fiction, or a crossover novel. I was simply writing a novel. I knew I wanted to write a darkly humorous book about a dysfunctional family living a seemingly ordinary suburban life.
I began the book writing from the point of view of Lou, aged thirteen and a half, the youngest member of the Coulson family. I quickly fell in love with her quiet struggles, her resilience and the unique way she sees the world. I originally planned to write from the point of view of each family member but after beginning with the youngest, I decided to stick with Lou. Her voice was strong and unusual and it seemed clear to me that this was going to be her story.
I finished writing Notes on My Family when I was twenty-nine and the novel was published after I turned thirty. I once had a creative writing tutor who used the phrase ‘never write in fresh blood’. With my twenties only just behind me it made sense that I look further back and draw upon my experiences as a teenager. Although Lou isn’t anything like me and her family certainly aren’t mine, I was bullied at school and I used some of my own experiences in the novel. I’ve always enjoyed coming of age literature along with novels and films centred around teenage protagonists. Writing from the point of view of a thirteen year-old girl came quite naturally to me and having a young teenage protagonist provided a lot of potential for humour, drama, and character growth.
I was offered representation for Notes on My Family before the novel was complete, something which is fairly unusual for a debut author. I had made contact with my now agent, Chloe Seager, when I submitted a different novel to the agency the year before. They didn’t take that particular book but Chloe did like my writing and we stayed in touch. When Chloe began to build her own list, concentrating on YA and children’s fiction, she asked me if I was working on anything and I mentioned Notes on My Family.
After I was offered representation I realised that my novel, along with having a teenage protagonist, had many other characteristics of YA fiction: bullying at school, problems at home, a best friend storyline and coming out. We felt the book would be enjoyed by teen readers and would fit the YA category.
Notes on My Family was published in November 2017. It quickly became evident the novel was appealing to both adult and teen readers. I met with a friend of mine who’d recently read the book. Over a cup of green tea in a Waterstones cafe she told me, I loved it! But this is an adult book. The jokes are for adults…
I don’t believe in writing down to children or teenagers but I understood what she meant. Adult readers were telling me the novel had made them laugh and cry, or that they were feeling grateful they were no longer at school. It seemed I had written a crossover novel, something that could fit two categories. I had written a YA book and a funny, contemporary novel for adults. I have always enjoyed the work of humorous writers such as Sue Townsend, Nina Stibbe and Mark Hadden. These authors have all written novels about young protagonists but their work is read by adults. Writing a crossover novel means writing a novel that will be read by a broad range of people, a novel that can fit into two different categories and be marketed in two different ways, all great things for an author.
Although Notes on My Family is now classified a crossover novel, I’m still thrilled it fits the YA genre, that teens are reading the book and hopefully taking something away from it. I think it’s important teenagers are able to see themselves reflected in the books they read as well as being able to follow their own literary paths. Our teenage years are often turbulent, they’re a time of change and of firsts. Fitting in can feel especially important. Ironically this comes at a time when many of us are still not quite sure who we are. One of the overriding themes of Notes on My Family is that it’s okay to be different. As Lou’s art teacher tells her, It’s the people who are different who make the difference. I’ve recently felt writing a novel that doesn’t fit neatly into one category perfectly suits both myself at as author and Lou, my unusual protagonist.